PM2.5 in China (Beijing), the cause and countermeasure

During the period of the most serious “red alert” on December/2015, I went to Beijing in China. I will report the situation about PM2.5 in China.

This is the picture on Dec/2015. Red alert day in Beijing. 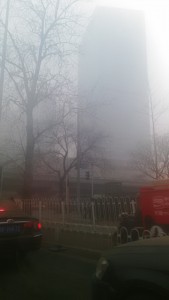 This time, I asked to my seven Chinese acquaintances living in Beijing “What is the main cause of this air pollution? And, how are the counter-measures?” I will share the information.

What do you think the main cause of PM2.5?

As you know, there are various opinions, what is the truth? Opinions of 7 Chinese acquaintances who are living in Beijing are as follows:

“Smoke going out from the factory”

“Influence of the domestic heating to use in winter”

On the other hand, the article of the Japanese newspaper is;

“The cause is a factory and domestic heating by using the coal.”

This is the same understanding between the Chinese local people and the Japanese newspaper.

What is the personal counter-measure against PM2.5?

And one Chinese man recommended me to wear a special mask for PM2.5 measures. It has the function that a nose and a mouth could completely block up the gap of the perfection.

And he said a mask made in Japan (Maker name is “3M”) are so much popular in China. Because it is high-performance.

Prioritized on the healh

In addition, many young women wearing an another type of mask such as protection of the mist of the nose. A nose mist mask has a filter for smoke measures in front of the a nose. This type of mask is not good visually. But, I think many Chinese women prioritize on their health than visual.

By the way, among seven acquaintances (All men between 20 and 30), only one men wore a mask.

Conclusion: After all, counter-measure is only one. Wear a mask!

I place a picture in the Beijing city of New Year holidays in 2016 that an acquaintance sent to me.

It was a clear sky in Beijing, I relived I knew there is such a day in Beijing.